Travel back
in time

At the Monastère des Augustines, the museological experience merges with the place, rich of nearly four centuries of history. In addition to visiting our museum, we invite you to discover an exceptional heritage by visiting the web portal of the Monastery.

Tracing the evolution of the spiritual and social engagement of the Augustinian Sisters of Quebec through the ages, the permanent exhibition offers a unique glimpse into the past. Discover the community’s way of life, their work caring for the sick, and how they balanced their traditional vocations for action and contemplation.

Throughout the rooms, you will find selected objects from the 40,000 artifacts drawn from the Augustinian Sisters’ 12 monastery hospitals. They form a powerful composite picture that brings the exhibition’s themes to life and that offers a provocative commentary on society’s past, present and future.

From Tuesday to Sunday
10am to 5pm

* Wearing a mask is mandatory.

** From Tuesday to Friday, our hours for the guided tours may be subject to change without notice. We recommend you call Le Monastère at 418 694-1639 on the morning you wish to come to confirm our visiting hours. 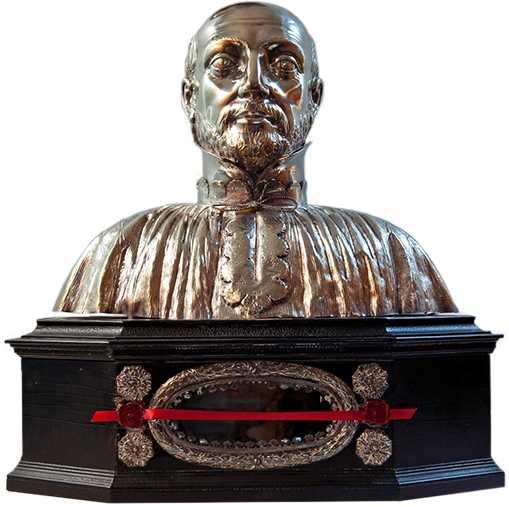 Made in Paris by master goldsmith, Charles Poilly, this reliquary bust represents the Jesuit missionary and martyr, St. Jean de Brébeuf. The solid-silver bust sits atop the reliquary containing the right half of Brébeuf’s skull. 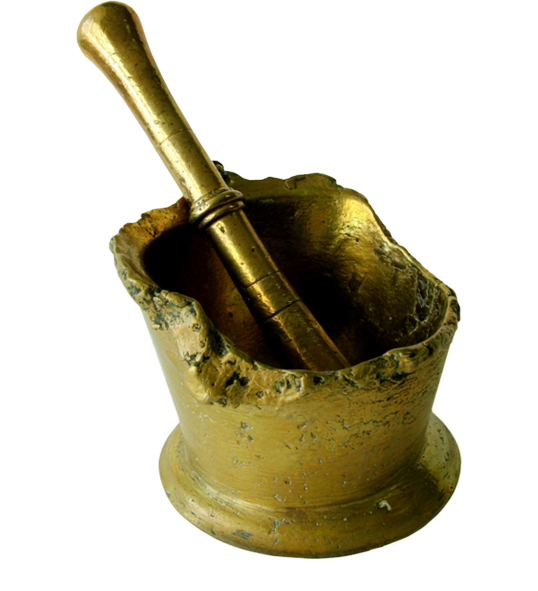 The Foundresses’ Mortar and Pestle17th century

The mortar and pestle were widely used by the Augustinian Sisters in the production of medicines. This brass instrument was reportedly brought from France by the three foundresses in 1639. In this case, the Mortar probably exhibits evidence of the fire that ravaged the Hôtel-Dieu de Québec in 1755. 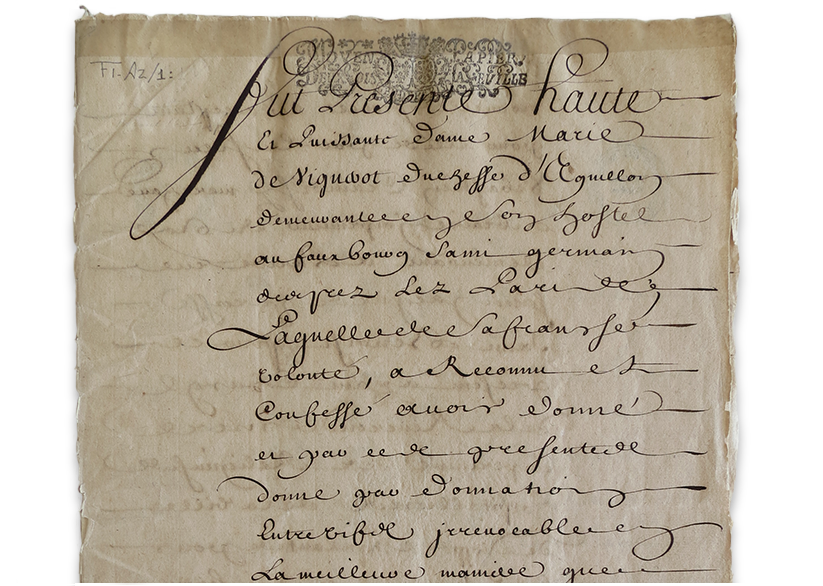 The Duchess of Aiguillon, Cardinal Richelieu’s niece, secured 22 400 livres tournois in capital (a Tours pound was a pound of silver used as currency when Tours was the capital of France). The interest was to be used to support the Hôtel-Dieu monastery-hospital. According to the terms of the agreement, the sisters from Dieppe committed to daily prayer and to having their patients pray for the Duchess’ salvation. 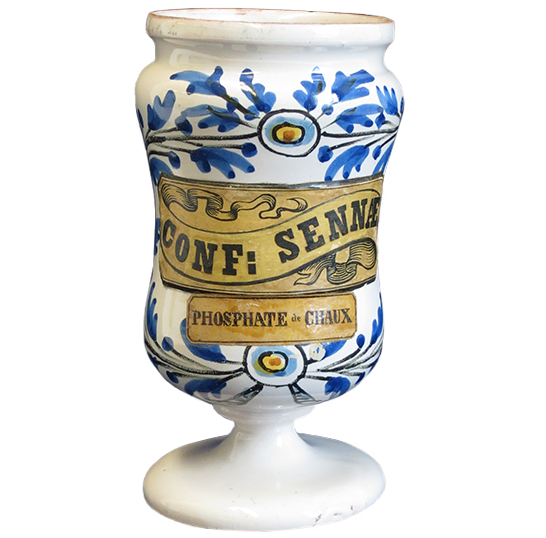 This jar, one of a set of ceramic apothecary jars from Old Rouen, was given to the Augustinian Sisters in 1787 by the Jesuit, Reverend Father Louis-Augustin de Glapion, after England ordered that the Jesuits’ assets in the country be confiscated. Previously, the King’s pharmacy had been tended by the Jesuits. Apothecaries, doctors and common people went there to stock up on creams, ointments, syrups and other remedies. 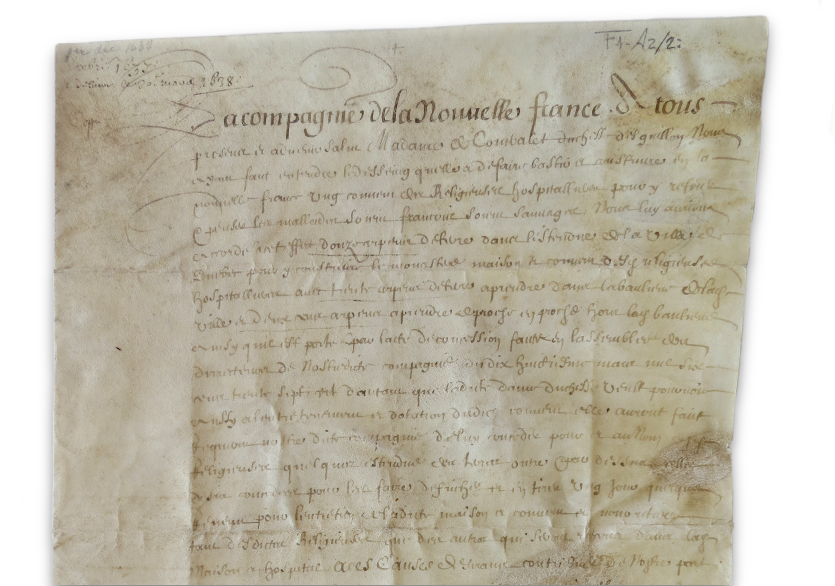 Concession Agreement from the Company of New France1637

The Company of New France grants 12 acres of land to the Augustinian Sisters of Quebec. It is on this land that the first buildings of l’Hôtel-Dieu de Québec are constructed. 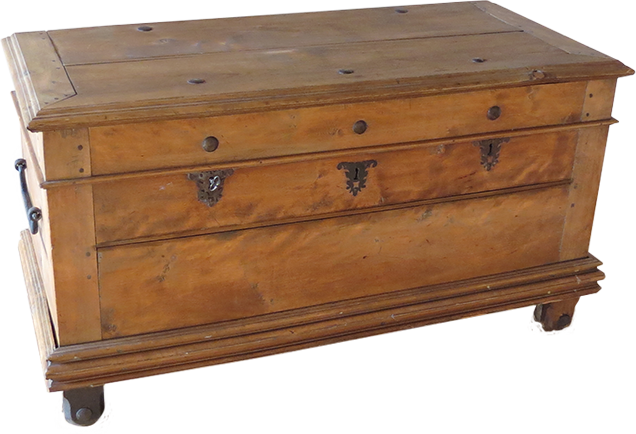 Marie Guenet de Saint-Ignace, Anne Le Cointre de Saint-Bernard and Marie Forestier de Saint-Bonaventure left Dieppe on May 4, 1639, carrying their valuables - including the contract for the founding of a hospital - in this trunk with three different locks. Each of the Sisters had in her possession one of the keys. The trunk - which was likely covered in skins to protect it from adverse weather conditions - probably also served as an altar during the crossing on board the Saint-Joseph. 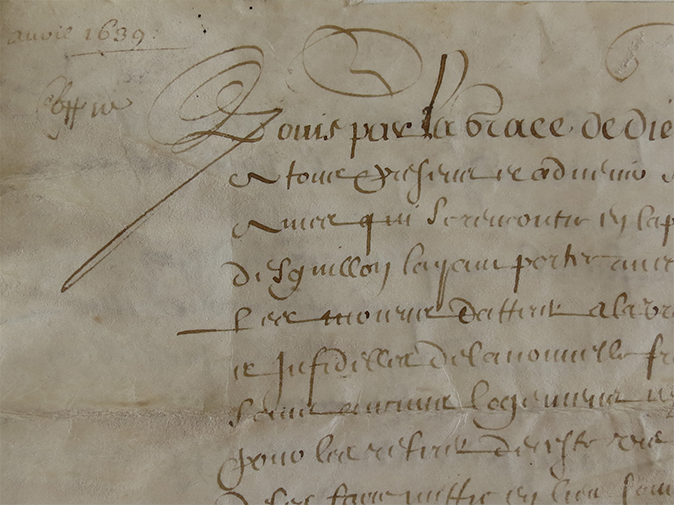 The King ratifies the intentions of the Duchess of Aiguillon, as well as the steps taken to found a hospital in New France. He authorizes the three sisters from Dieppe chosen for this mission to settle in Quebec, and charges them with managing l’Hôtel-Dieu de Québec. 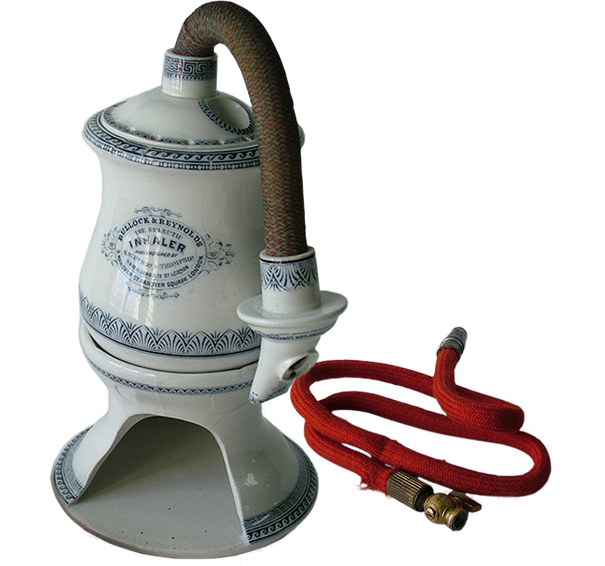 Made in London, England, in the latter part of the 19th century, this porcelain instrument was used to treat respiratory infections. Medicine was diluted in a bowl of hot water and the vapors were inhaled by the mouthpiece at the end of the tube. 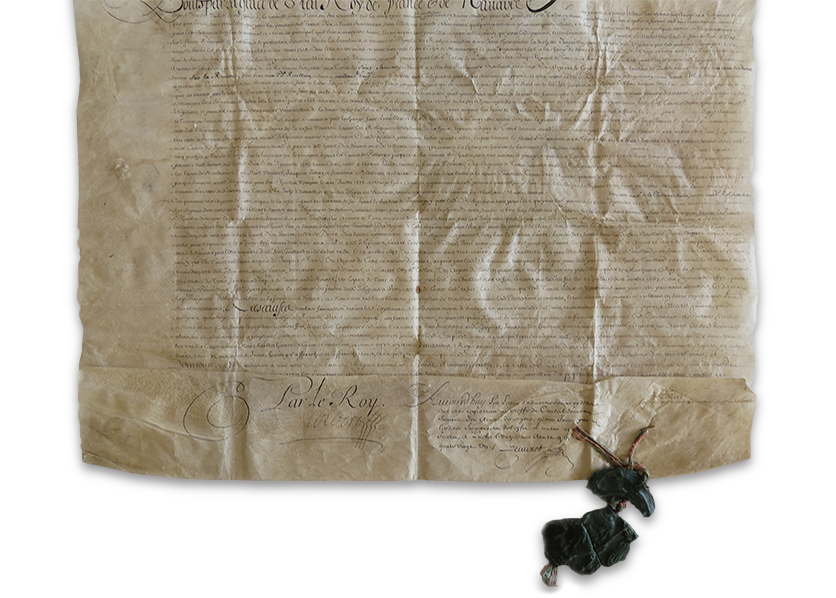 Letters of Amortization signed by Louis XIV and his Minister of Finances, Colbert1680

In this document dated June 7, 1680, Louis XIV waives the amount that the Augustinian Sisters owe the crown for the land they possess. 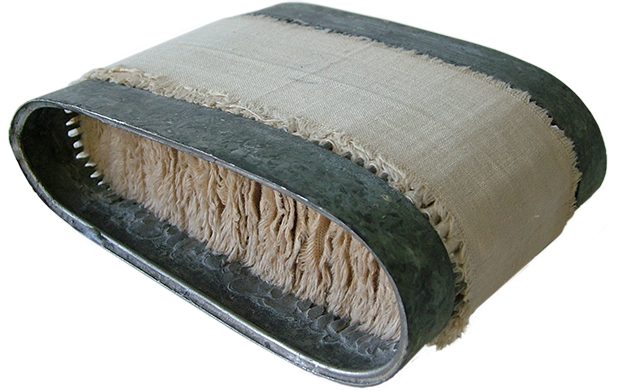 In 1848, at the request of one of the hospital’s surgeons, the Augustinian Sisters designed this model of handcrafted mask. Made of tin and linen, the instrument was used with chloroform anesthesia. It covered the patient’s mouth and nose. 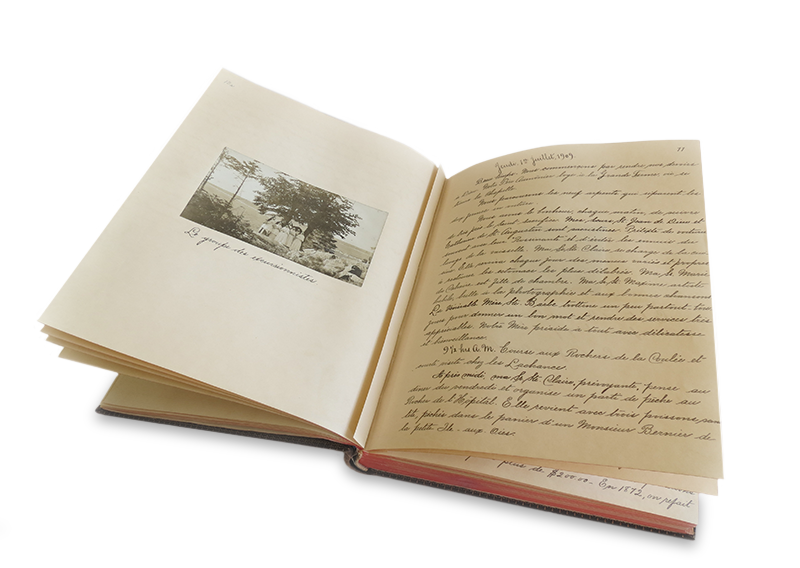 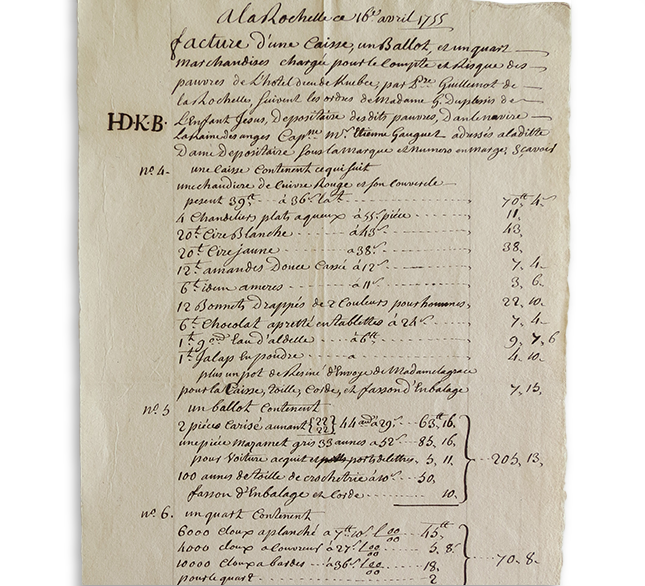 Bill for merchandise from France1755

The Augustinian Sisters maintain close ties with several suppliers in France. Pierre Guillemot, a merchant from La Rochelle, describes goods sent over in 1755 on the ship La Reine des Anges. Medicines and the products used in making them constitute a large part of the list. 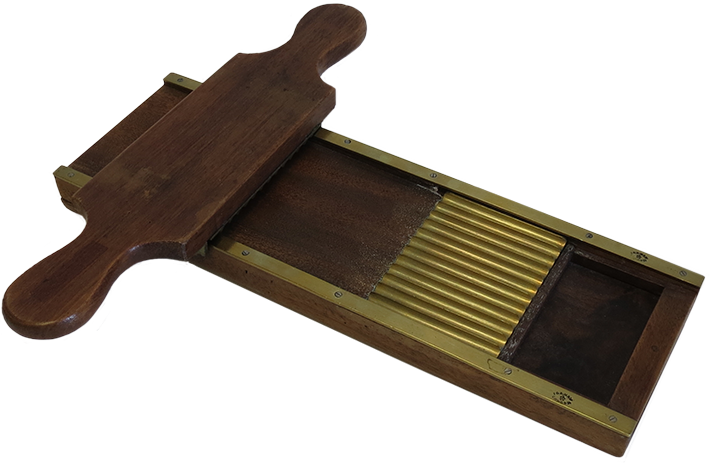 When making pills, the apothecary nun would first mix the medicinal paste in the mortar. She would then spread it over the indentations in the copper portion of the pill dispenser. The upper portion would then be closed and the paste would be left for 12 to 24 hours. Once hardened, it would be in the shape of long tubes that were cut to the desired thickness. If a round pill was needed, the apothecary nun would roll it in the palm of her hand. 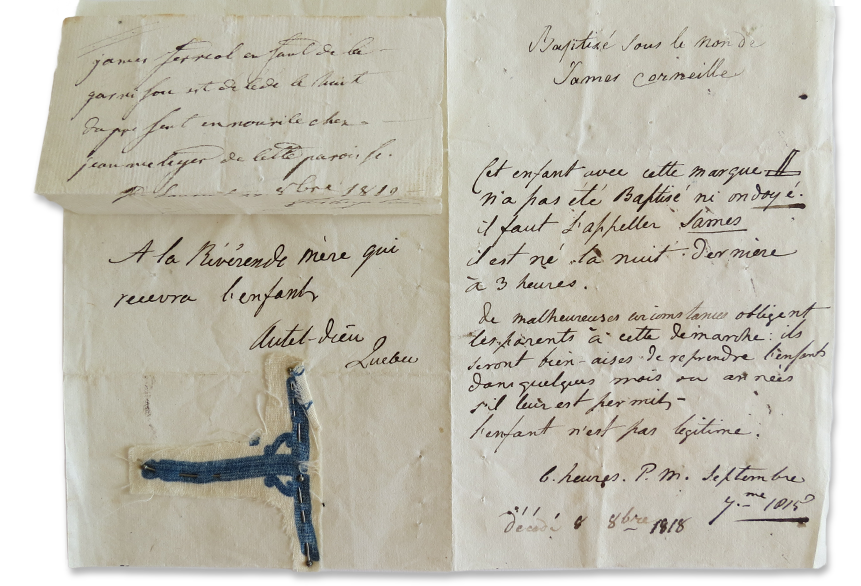 In 1801, measures are adopted to prevent the abandonment of newborns and the Augustinian Sisters become agents of government policy. Notes pinned to babies’ diapers bear witness to parents’ distress and the hardships of life during the period. Of the 1375 children taken in by the sisters between 1801 and 1845, 736 died, 102 later returned to their families and 537 were adopted.

In 1801, measures are adopted to prevent the abandonment of newborns and the Augustinian Sisters become agents of government policy. Notes pinned to babies’ diapers bear witness to parents’ distress and the hardships of life during the period. Of the 1375 children taken in by the sisters between 1801 and 1845, 736 died, 102 later returned to their families and 537 were adopted. 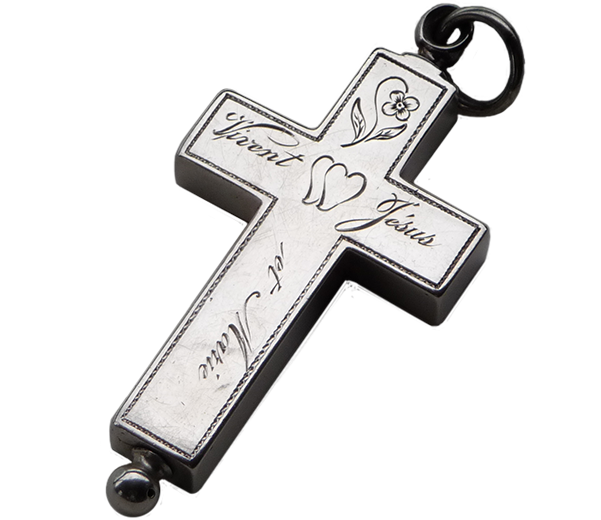 In 1718, the Augustinian Sisters of the Hôpital Général de Québec are the first to wear reliquary crosses, a privilege that is granted to them by Bishop de St-Vallier. The cross, which contained a relic of a Saint, was given to a sister during the ceremony of profession of perpetual vows. The tradition was later adopted by other monasteries, including the one in Chicoutimi which was founded by nuns from the Hôpital Général de Québec. When the Augustinian Sisters modified their habit in 1967, they adopted a simple silver cross instead of a reliquary cross. 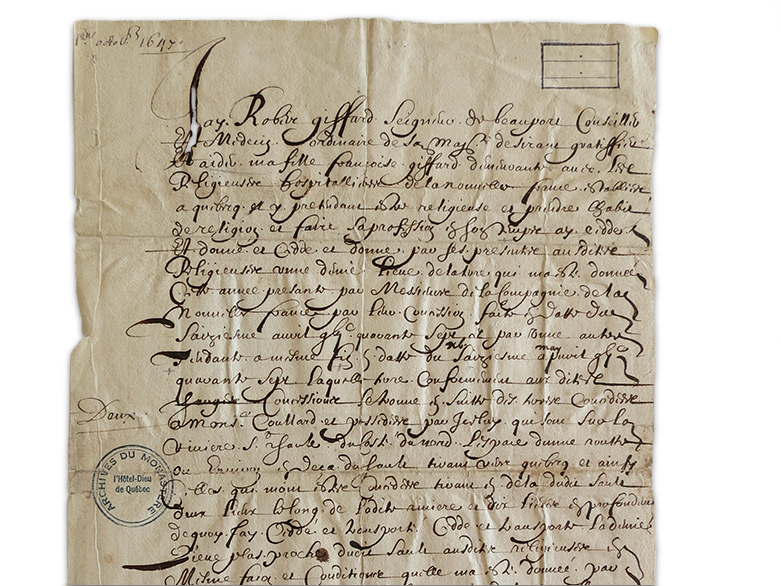 Donation of the Seigneury of Saint-Ignace by Robert Giffard1646

At the age of twelve, Marie-Françoise Giffard entres religious life at l’Hôtel-Dieu de Québec and takes the name Marie de Saint-Ignace. She is the first Canadian Augustinian Sister. By way of a dowry for his daughter, Robert Giffard gives the Seigneury of Saint-Ignace to the Order. 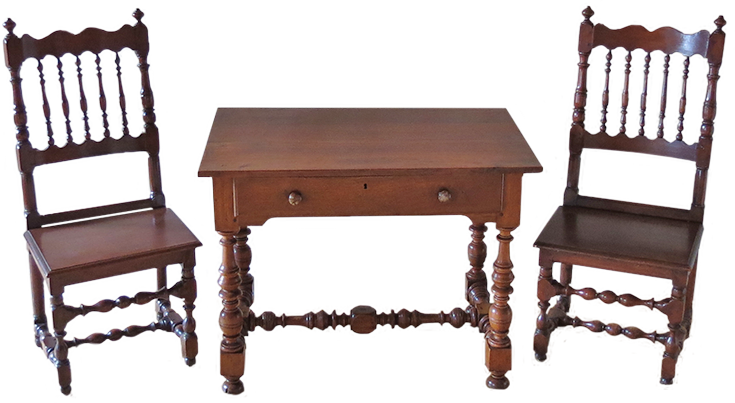 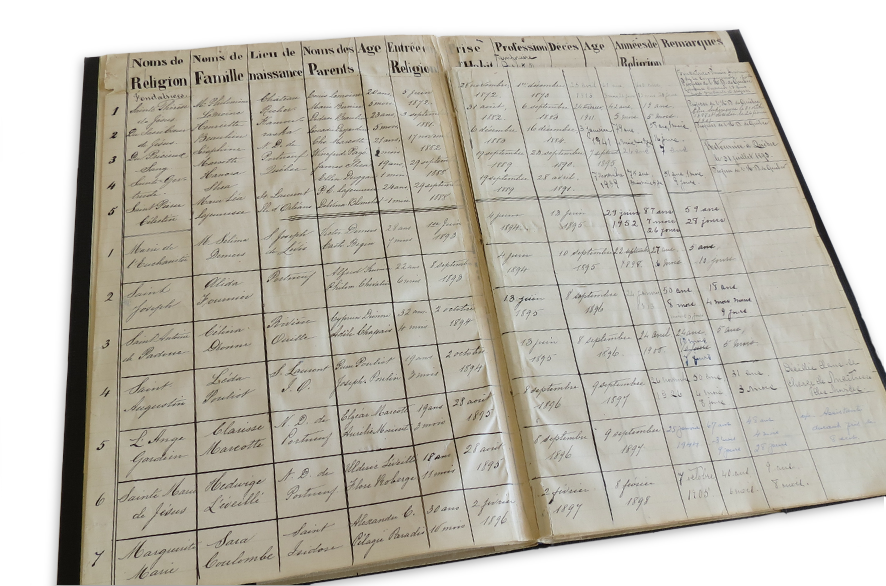 Register of women entering the Order, taking the habit and making vows1893-1994

This register, similar to those used in other monasteries, is a record of the names of all the women who entered the Order at the Hôtel-Dieu de Lévis monastery. As they became postulants, then novices, and eventually took their perpetual vows, all the important dates were added to the register. 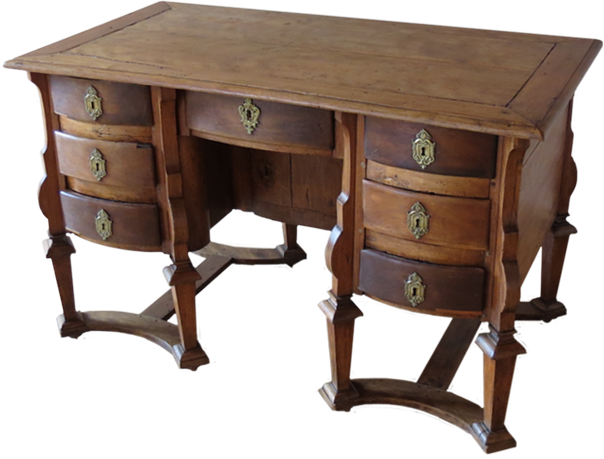 When Louis XIII dies in 1643 and Louis XIV is still a child, the Regent Queen Anne of Austria appoints Mazarin Prime Minister. This cherry wood desk dates from this period. It is considered to be the ancestor of the Executive Desk because the drawers do not extend down to the floor. 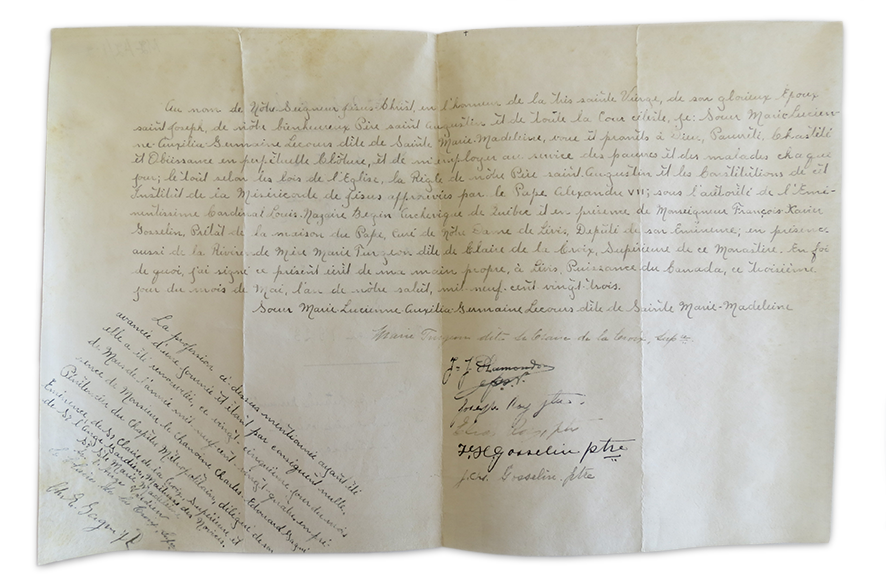 This signed certificate of perpetual vows of Sister Germaine Lecours, also known as Sister Saint Mary Magdalene, a professed sister of l'Hôtel-Dieu de Lévis, is dated May 3, 1923. It confirms her vow to devote herself to serving the sick all the days of her life. Sister Lecours will later become the foundress and first Superior of l'Hôtel-Dieu de Montmagny.

Le Monastère offers cultural programs that enable you to explore the Augustinian Sisters’ heritage and the theme of holistic health through a variety of classes, workshops, lectures and concerts, all in an authentic and inspiring setting.

No scheduled activities at the moment.

Our activities designed for school groups are rooted in the Augustinian Sisters’ desire to make their heritage accessible to future generations. The activities are a chance for our student clientele to connect with an important part of our history and traditions.

The activities last a maximum of 90 minutes, and include:

Through visiting Le Monastère and interactive activities linked with history and health, youngsters will discover the Augustinian Sisters’ heritage, as well as the role they played in the evolution of healthcare in Quebec.

The activities last a maximum of 75 minutes, and include:

Download the pdf version of our school groups offer 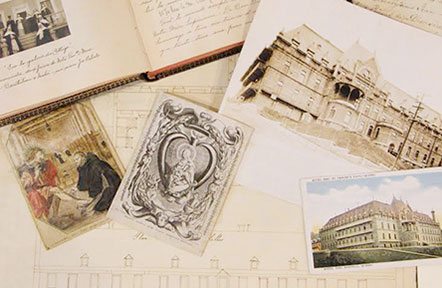 The Augustinian Sisters’ archives constitute a rich and vital institutional memory — one that is nearly unparalleled in Quebec. They trace the evolution of healthcare, agriculture, community life and commerce from the earliest days of New France.

The Archives Centre is open to researchers, specialists and interested persons by appointment only. However, Le Monastère’s archives are now accessible to the public through a web portal (in French only). 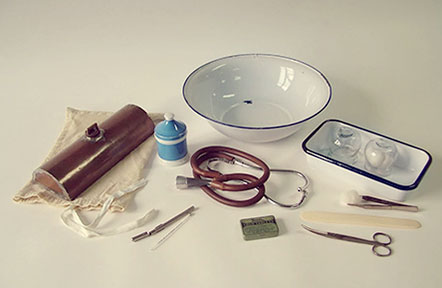 The collections of artifacts from the 12 monastery-hospitals are stored in the museum reserve in optimal conditions. Medical and pharmaceutical instruments, furniture, works of art, liturgical objects, common tools used in traditional handicrafts and other common and uncommon witnesses to the past await their turn to be showcased in exhibitions in the museum.

The AtticToMuseum Reserve is open to researchers and specialists by appointment only.

Stay in the heart of Le Monastère in rooms noted for their comfort and simplicity.

A wide selection of inspiring activities in holistic health and culture.

Personalized stays that will surpass your expectations.